The two main reasons for this amazing diversity are, firstly, that Cyprus was not affected by the last ice-age (which wiped out many species from areas further north), and secondly, that Cyprus forms a resting and nesting station for birds migrating between Africa and Eastern Europe.

Turkish Republic of Northern Cyprus has an intense Mediterranean climate with the typical seasonal rhythms strongly marked in respect of temperature, rainfall and weather generally. Hot, dry summers from mid-May to mid-October and rainy, rather changeable winters from mid-November to mid-March are separated by short autumn and spring seasons of rapid change in weather conditions. The long narrow Besparmak mountain range, play an important part in the meteorology of Turkish Republic of Northern Cyprus. The predominantly clear skies and extensive sunshine give large seasonal and daily differences between temperatures of the sea and the interior of the island which also cause considerable local effects especially near the coast.

At Latitude 35 degrees north and Longitude 33 degrees east, Turkish Republic of Northern Cyprus has a change in day-length from 9.8 hours in December to 14.5 hours in June. In summer the Turkish Republic of Northern Cyprus is mainly under the influence of a shallow trough of low pressure extending from the great continental depression centered over southwest Asia. It is a season of high temperatures with almost cloudless skies. Rainfall is negligible but isolated thunderstorms sometimes occur giving rainfall amounting to less than 5% of the total in the average year. In winter, Turkish Republic of Northern Cyprus is near the track of fairly frequent small depressions which cross the Mediterranean Sea from west to east between the continental anti-cyclone of Eurasia and the generally low pressure belt of North Africa. These depressions give periods of disturbed weather usually lasting for a day or so and produce most of the annual precipitation, the average amount from December to February being nearly two thirds of the year`s total. 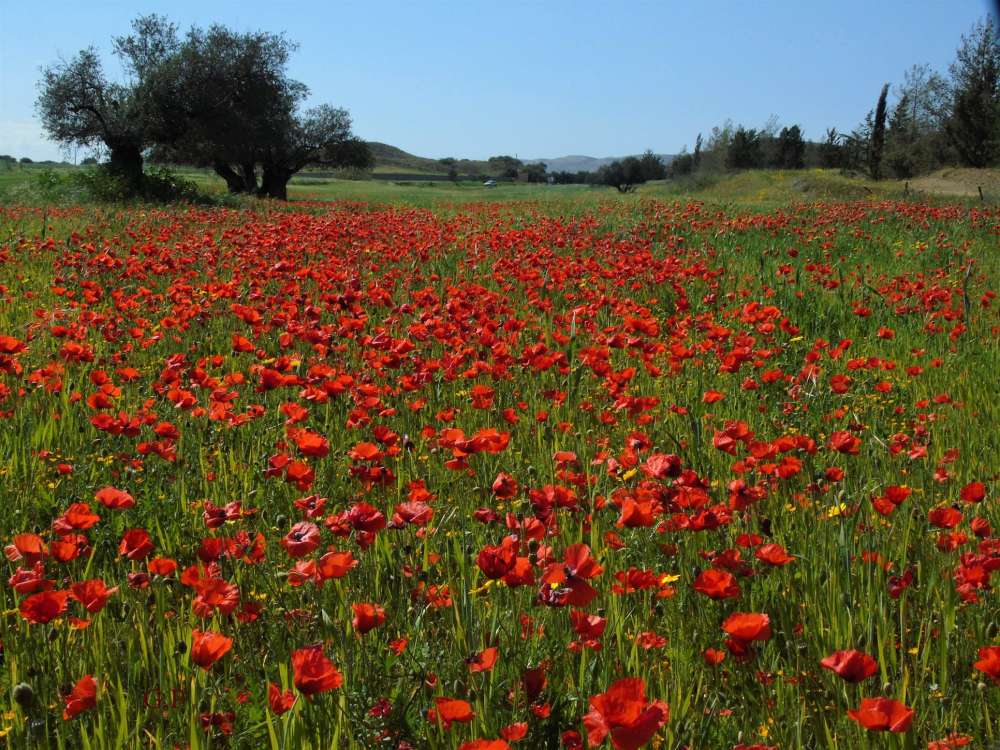 As Cyprus enjoys the Mediterranean climate the natural flora of the Island is rich and interesting to the botanist, as well as to the uninitiated.

The Summer visitors to the Island will be struck by the apparent barrenness of the plains and foothills which are frequently bare of trees for miles. This seeming infertility derives from the fact that the greater part of the lowland flora consist of winter annuals. The Island, being in the Eastern part of the Mediterranean, does not get enough rainfall in Summer. But the animals to be found in the island have a wide-spread origin. Some can also be found in North West Europe, while others can be found in South Africa.

In trying to describe the flora of the Island, it is advisable to look first at the forest trees. The most wide-spread species of forest trees, are natural pine, Cypress and oak. Eucalyptus varieties have also been introduced to the Island. Forests in the Island are confined to the Southern massif and the Kyrenia range.

The Southern foothills of the Kyrenia range and most parts of the Island are covered with evergreen shrubs. These shrubs are mostly common in the coastal regions. Two of the commonest of these shrub varieties, particularly well developed in the Karpass area are: Juniperus Phoenicea and Pistacia Lentiscus. In place the foeristically rich scrubs, cistus calycorome, lithospermin and lavandula occur.

Though the lowlands are yellow and brunt in the Summer months, within a week of the beginning of the rainy season the fields and foothills are covered with new vegetation. In Cyprus the autumn and winter annuals are very quickly followed by the spring flowers, so that one thinks that there are not two flowering seasons in the Island but one long flowering season.

The first flowering plants are scillas, grape hyacinths, encus, calchicucun and narcissus serotinus, followed, at the new year, by one of the loveliest of the Cyprus endemics, Romulea tempskaya with its star like flower in colours varying from deep purple to pure white.

Also in this season, cyclamen persicum presents a very beautiful scene at the foot of the Karpass and Kantara. In march and April the wild anemones and the lilies of the field, with great variations in colour and form, begin to flower. The Southern slopes of the Kyrenia range present a magnificent view with blankety coverings of these flowers. Meanwhile, in cultivated fields near Myrtou (Camlibel) wild tulips are abundant; and in other parts of the lowlands, narcissus tazetta can be found in abundance.

At the end of April and the month of May, though the central plains are getting hot and dry the Northern slopes get a beautiful covering of flowers. Most common are wild orchids and about half a dozen species of ophrys with the red and white flowered cistus

As much of Cyprus is under cultivation, indigenous animals are reduced in number: and in some cases have become varieties confined to odd corners of the Island. 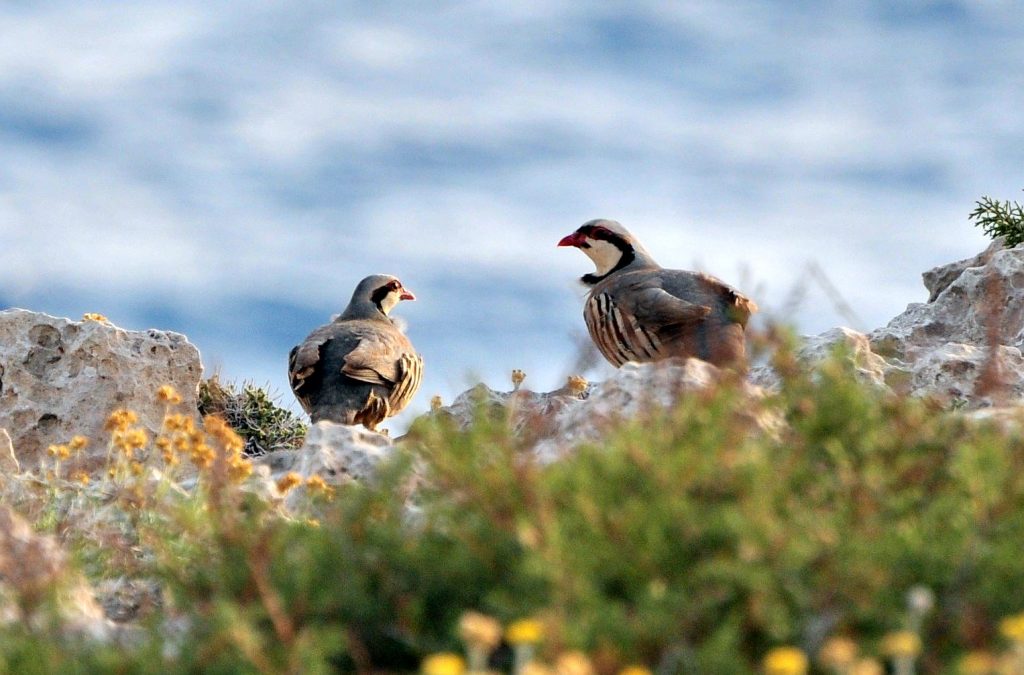 The only large indigenous wild animal still in existence in the Island is the Mouflon, a variety of mountain sheep pecular to Cyprus. This animal is in a reservation in the Southern part of the Island and on the Troodos mountains. The other indigenous animals are the hare, fox, hedgehog, rat and various kinds of bats. The Island had an unenviable reputation for her abundance of snakes. Numerous snakes can be seen in the hot summer months but they are by no means all poisonous. The only really poisonous snake in the Island is a species of viper. Most of the other snakes seen in the Island are not dangerous, especially the large black one which serves a very useful purpose in preying on rats and other vermin.

There are two kinds of lizards; and blind worms and chameleons are also to be found. The small gekko, with suckers on its feet is common in older houses. Two kinds of frogs, the green tree frog and the edible frog, are also common in the Island.

On the bird life of Island one can say that Cyprus falls between two of the great bird migration routes, one from western Russia Southwards through Palestine to East Africa, and the other being the Balkan African route. As a result of this position of the Island, many interesting birds are to be observed, especially during the times of Spring and Autumn passages. Of the indigenous species the largest are vultures and eagles. The Vulture, the most common scavenger, sails for hours on end in the air currents with scarcely a movement of its large wings. It is by far the most common of its species. The Black Vulture is present in relatively small numbers. Of the eagles, two species may be seen and are not uncommon. They are the large Imperial Eagle, which feeds on small mammals and carrion and the smaller Bonelli`s Eagle, which is a much fiercer bird than its larger cousin. Occasionally Spotted Eagles visit the Island.

In the plains and open foothills larks, mainly the crested variety, are common. The small Black and White Cyprian Wheateater is conspicuous, especially in the foothill regions. Flocks of pigeons nesting in forests and cliffs are common throughout the Island.

Black Bellied Sand Grouse nest in small colonies in some of the more barren and stony parts of the Mesaoria plain. Along the coasts of the Island, Shag and Cormorant are to be seen together with numerous species of gulls. At river mouths and along the more rocky coasts small Red and Green Kingfishers can be sometimes be seen.
During Winter numerous wild fowl visit the Island; snipe, woodcock, quail, many varieties of duck and occasional bustard geese. Large number of finches and other small birds are also common Winter visitors.

Of the birds, notable for their song, the most outstanding are the Golden Oriole, Nightingale, Blue Rock Thrush and Black Headed Bunting; all to be heard early in Summer. The most spectacular and highly coloured birds commonly seen in the Island are the Golden Oriole, Bee Eater, Roller, Hoopoe, Kingfisher and Filamingo. The main part of the Island visited by Filamingos is the Larnaca Salt Lake, which is in the South of the Island.

The seas around the Island are rich in a variety of small fish, some of them very beautifully coloured. Large fish, however, are not abundant. Of the local fish the most commonly caught are the red grey mullet, rock bream, gunard and sometimes larger fish as bonito, tunny and skate. In addition a variety of smaller fish are caught and may be observed exposed for sale.

Large spiders and centipedes exist but are not dangerous. The most dangerous invertebrate is perhaps the scorpion, which is not very common. There are numerous insects found in the Island, none of which are particularly dangerous to humans.

In Summer many hornets are to be seen, but they are remarkably mild natured and do not generally sting unless greatly sting unless greatly provoked. Night flying moths are particularly abundant.
Mammals such as the pygmy elephant, pygmy hippopotamus and wild boar dominated the island`s animal life until 2000 BC, the sole survivor being the Cyprus moufflon (Ovis musimon).

Today the most frequently seen animals are the fox, Cyprian hare and rabbit, long-earned hedgehod, Cyprian shrew and six species of bat. Occasionally dolphins are seen swimming south from Turkey. 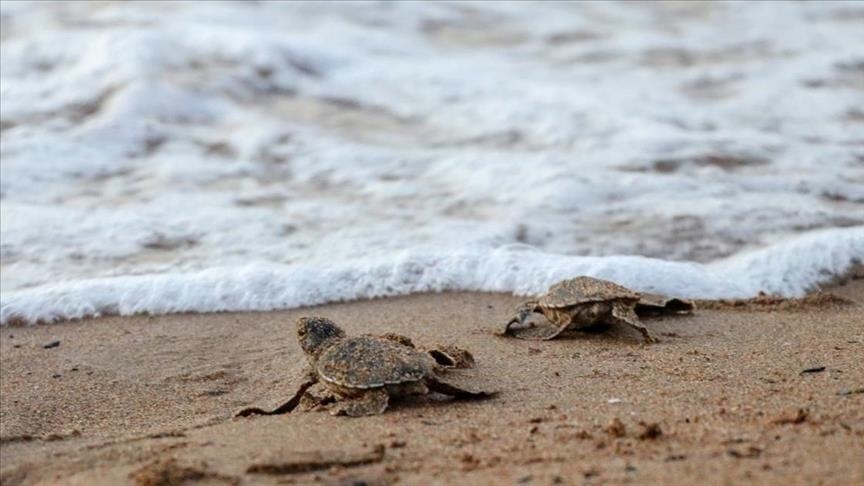 Marine turtles begin their lives on land, where they emerge from eggs, after 45-60 days incubation in the sand. On reaching the sea, they swim frantically out to offshore waters where they remain for the rest of their lives, the only exception being when adult females come ashore to lay their eggs. It is estimated that only one hatchling in two thousand will survive to maturity. When they are 25-30 years old, and 1-2 meters in length, adult males and females migrate to waters off nesting beaches to feed and mate. During a nesting season a female lays 3-4 nests, each containing around 100 eggs. She may nest every 1-3 years usually returning to the same beach. Some theories suggest that turtles return to nest on the beach where they hatched. It is not known how long marine turtles live, but estimates are in the region of 60-120 years.

Two species of marine turtle nest on Mediterranean beaches, the loggerhead, Caretta caretta, and the green turtle, Chelonia mydas. Both of these nest in Northern Cyprus. The total Mediterranean populations of these two species are estimated at 300-400 green and 2000 logghead females nesting annually. It possible b estimate how many males a juveniles there are. These species are both endangered, especially the green turtle, with Cyprus and Turkey being the only known nesting sites. In 1991, with increasing awareness of the plight of marine turtles in the Mediterranean, the Society for the Protection of Turtles in North Cyprus contacted Glasgow University for assistance. This resulted in the Glasgow University Turtle Conservation Project initiated in 1992. Student volunteers work alongside volunteers from these non-governmental organizations and the local Department of Environmental Protection. Throughout the coastline N. Cyprus 80 beaches are monitored from may through until October since m sandy beaches support some turtle activity.

On the beaches at Alagadi, (10 miles east of Girne/Kyrenia), nightly patrols arke carried out enabling detailed information about biology of these species to be collected. q nesting season in N. Cyprus runs from] May until early August with hatching occurring from late July until late September.